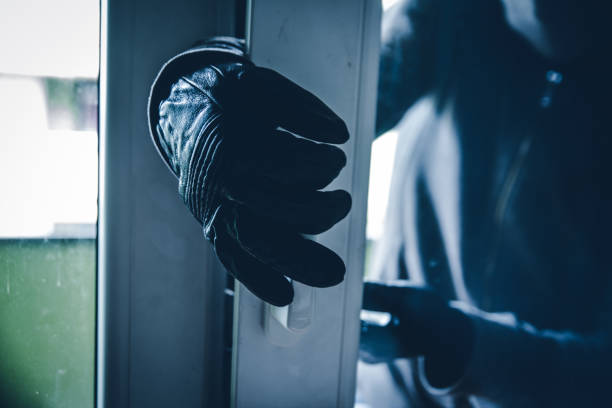 Discovering that you’ve been a victim of a robbery is never a good thing. Especially when the thief broke in while you were out, or even worse, while you were fast asleep. A horrible thing about this is once the thief realizes he missed some valuable things, there is a strong possibility that they might return. This is bolstered by an article written by a criminologist. Once they burgled you once, they’ll roughly know the places where other valuables are the entrance and exit points of your home.

Most people who were victims of burglary think it was bad luck that they were targeted. Sometimes, there are thieves that intentionally choose which houses they break into. They might have observed the general area and chose your house. Thinking that it was just bad luck is a big mistake that hurt your home security.

Burglars target the same house twice for a variety of reasons. Since it is easier than staking out a new home, robbers often return to the scene of the crime to see if the site is still easy to break into. If they do not return, they could inform others so that they may try for themselves. It might sound paranoid, but if they think you’re a simple target, they would not pick someone who could be more difficult or dangerous.

Thieves feel at ease the first time they burgled, it’s very likely they’ll return to check out the scene and see if it’s still as basic as it was. They already are familiar with your home, such as how the property is set out, where the valuables are hidden, when the best time to strike is, and how to get into and out of the house quickly. Since they know you won’t expect it too soon, the most opportunistic burglars will strike soon after the first burglary.

After a break-in, there are a few things you can do. The very first thing you can do is call the authorities. To prevent unintentionally messing with or damaging evidence, do not touch anything in your home until you’ve realized what’s going on, and tell the cops everything that happened. What you can do after is to contact an emergency locksmith in Belfast to assess your security and change the appropriate locks.

Second, make a list of all the things that have been stolen so that you can inform the police when they arrive. If something of high value was taken, contact your insurance company as well. They will help you find out what to do and whether or not your stolen items are covered. Your insurance can also cover any immediate expenses, such as replacing items that were broken.

Be certain your keys aren’t lost. If you suspect a key is missing, change your locks right away. Then, look and see if your home has any vulnerabilities. If you don’t have an alarm system or leave your windows or doors open, the burglar targeted you for a reason. It’s best to fix this right away. Installing a CCTV camera or a smart home surveillance device gives you complete control over your security settings. Locksmiths in Belfast are more than capable of installing security devices for your home.

To prevent a potentially unsafe situation, always lock your windows and doors when you leave and when you’re at home. You can also ask Lock Doc NI for more advice on home security, we provide locksmith services in Belfast. You can check our locksmith reviews to see how many customers we helped with their home security.

What is the Aiphone Intercom System -Lockdoctorni

Locksmith Newtownabbey. RESIDENTIAL LOCKSMITH SERVICE from the Lock DOctor. There are many reasons why a proper locksmith service is going